So many generous people have raised money for Walking With The Wounded through an event or by taking on a challenge and in doing so helped improve the lives of our wounded ex-servicemen and women. Do remember to send us photographs – we love to be able to showcase the amazing things our extraordinary fundraisers do to support our wounded. Thank you all for your contributions.

Here are just a few of our recent fundraisers:

Whilst clearing out his father’s house, Charlie Barne, grandson of Lieutenant Colonel Anthony Barne came across his grandfather’s war diaries. When Charlie moved from out of London to Wiltshire in 2016, he used his commute to type up, edit and annotate the diaries. The result is a fascinating first-hand account of the entire Second World War from the perspective of ‘Churchill’s Colonel’. In honour of his grandfather, Charlie has decided to donate the royalties from the book to Walking With The Wounded. 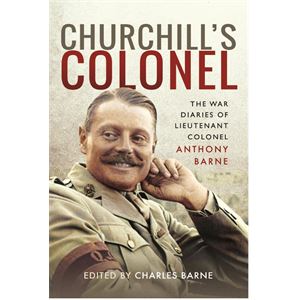 Charlie notes, “The diaries offer an incredible insight into my grandfather’s military career. I initially started to type them up as a personal project; however, I soon realised that these are important stories for future generations. Thankfully, my grandfather returned from war unscathed but I am only too aware that not everyone is so fortunate. It seemed natural to support a charity helping those that have served, and I am delighted to support Walking With The Wounded and the outstanding work they do.”

The diaries have an enormous scope covering time in Palestine and Egypt before he joins the Eighth Army, describing the retreat back to El Alamein, the battle and its aftermath. He ends the campaign commanding his regiment. He often graphically details the physical realities of war: the appalling conditions in the desert, the bombardments of the regiment from the air, the deaths and serious injuries of fellow soldiers. In 1943, he flies down to Rhodesia to see his wife and infant son before returning to Cairo to join Churchill’s regiment, the 4th Hussars. Arriving in Italy in 1944, he recounts the campaign as the Allies push north. The tone of the diaries varies wildly: often witty, sometimes outrageous but also poignant and philosophical. The voice and attitudes are entertainingly dated, but are delivered with warmth, a charming turn of phrase and a keen eye for the absurd.

To purchase a copy of ‘Churchill’s Colonel’ visit www.pen-and-sword.co.uk  and use code WWTW25 to receive a 25% discount at the checkout.

The Last Overland: Singapore to London

In 1955, a team of intrepid adventurers set off on The Oxford & Cambridge Far Eastern Expedition- an incredible 16,000 km journey driving from Singapore to London, funded by Land Rover. In August 2019, a team are set to recreate the infamous route and raise funds for Walking With The Wounded.

Driving the original 1955 Series One Land Rover (‘Oxford’), Tim Slessor-one of the original team members will join Alex Bescoby and others in remaking history. This time, the team will forge the path through some of the densest jungles, highest mountains and most arid deserts on the planet.

They will leave Singapore on August 25th 2019 and travel through Thailand, Myanmar, Nepal, Kyrgyzstan, Uzbekistan, Turkmenistan, Iran and Turkey before reaching Europe; eventually arriving in London 100 days after setting off.

Tim Slessor had a formative life experience serving in the Royal Marine Commandos during his British Army National Service in the early 1950s, which is why he is keen to support UK and Commonwealth veterans who need that extra boost after leaving service through Walking With The Wounded.   It was during his time in the army that he first visited Singapore, and formed a lasting bond with the country. 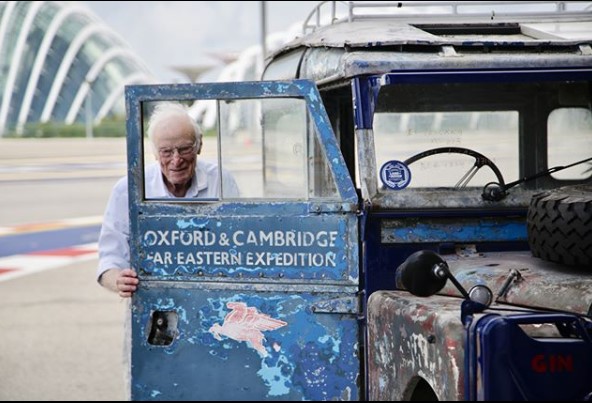 Sequin Art, a business based in Swaffham, Norfolk, has just launched a new design that features poppies. In many countries, the poppy flower is a symbol of remembrance and hope. It represents those who have lost their lives serving their country. £1 from every Poppies craft set sold will be donated to Walking With The Wounded. Click here to purchase a poppy: http://ow.ly/WgRW50vy4TI 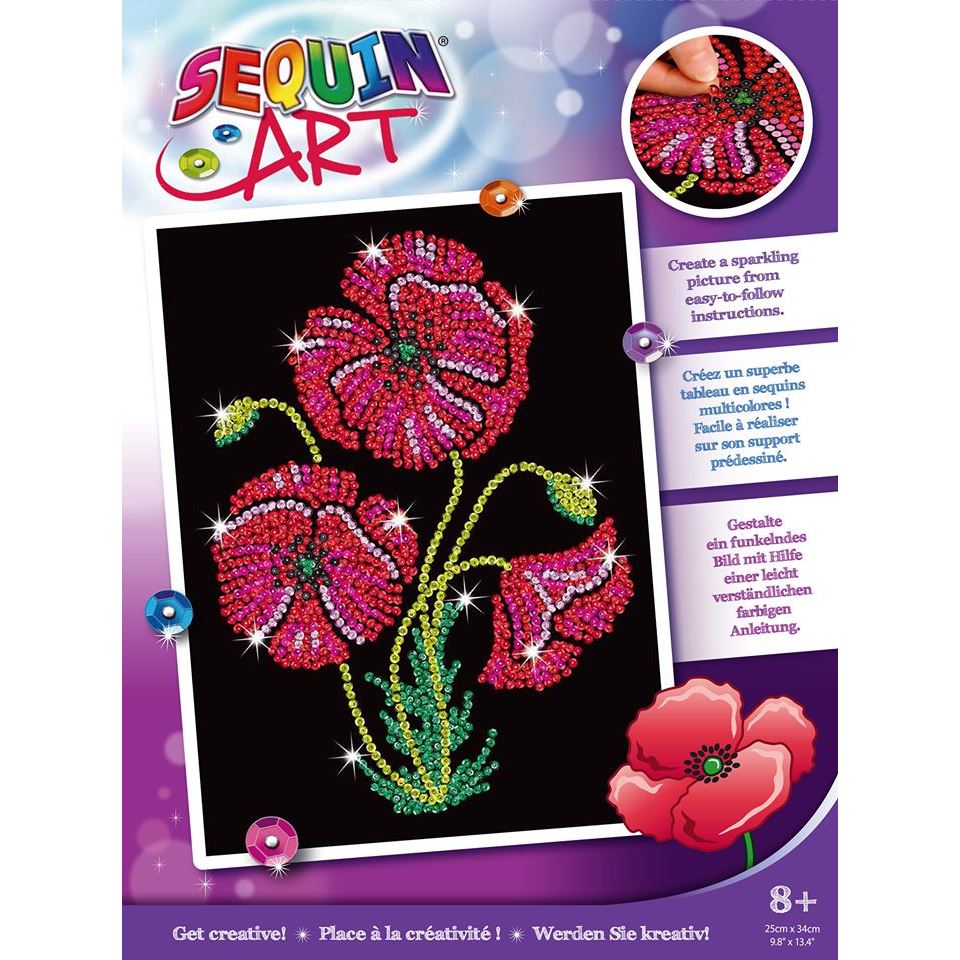 Theo Lavelle, aged 7, has successfully climbed Snowdon raising over £900 for WWTW. He followed in his sister, Olivia’s, footsteps who climbed Snowdon at the age of 7 in 2015 raising vital funds for those who have served. Their mother, Katherine, thought it would be an ideal way of raising awareness and sponsorship. She says taking on this challenge and doing it for charity has brought up many questions and has helped the children appreciate the simply things in life and the importance of charity.

A huge thank you to Theo, Olivia and their mum Katherine from all of us for your support!

You can sponsor Theo HERE 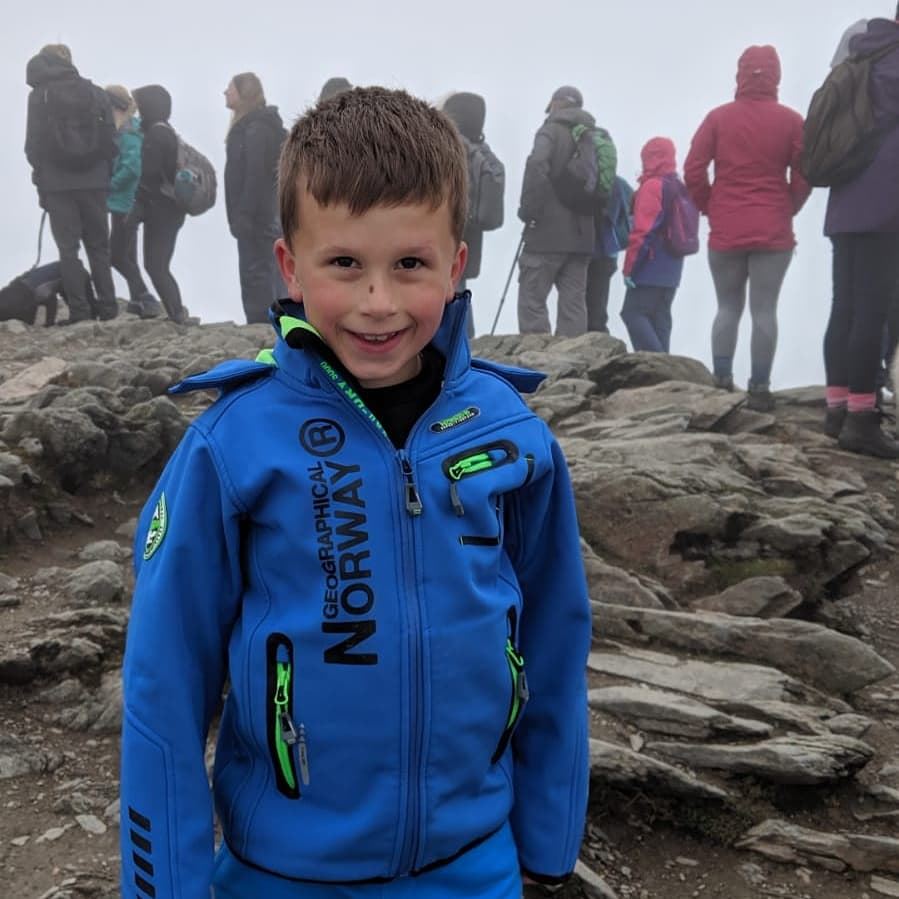 On the 29th May this year, Annalise will be taking part in the Tenzing Hillary Everest Marathon.  The starting point of this gruelling 26.2 mile race is at an altitude of 5365m above sea level. The race, which runs on 29th May each year to commemorate the first Everest ascent by Tenzing Norgay and Sir Edmund Hillary in 1953, begins at Everest Base Camp at the foot of the Khumbu icefall, and descends through Gorak Shep towards the finish line at Namche Bazar (3,540m).

Read more about her upcoming endeavour by clicking HERE. 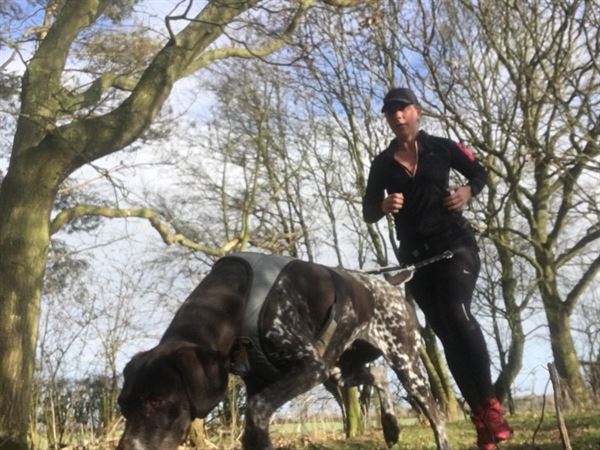 My name is Jack Bruce. I am 65 years old and an ex serviceman having served with the Royal Corps of Signals in Northern Ireland, Cyprus and Germany during the 1970's. They taught me how to ski! Inspired by an old hero, Joachim Ronneberg, who led the raid on the heavy water plant at Telemark and escaped with the rest of his team by skiing 200 kilometres in one weekend, I decided to see how far I could ski in one day. On Saturday 30th March 2019 in Courchevel, France, (Le Praz) I'll be attempting to set a new Guinness World Record for the greatest distance skied in 8 hours. I hope to cover 200 kilometres (125 miles) in that time and cover 75,000 vertical feet. (The equivalent of skiing down Everest two and a half times)

Having served for a few years it gives me great pleasure to have an opportunity to help those men and women who require the support offered by  WWTW. 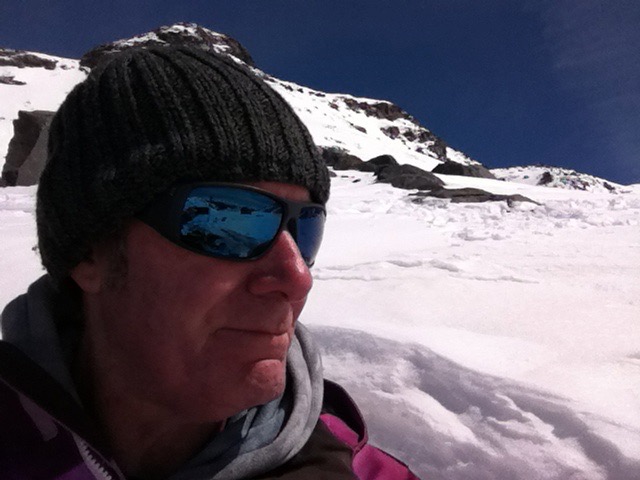 Rachel is taking part in the Mongol 100 race in March 2019.   The race is run on Lake Khovsgol and the race objective is to traverse the entirety of the lake from north to south, by any means: Foot, skate or bike.   A full time working parent of 3 lively boys, she wanted to motivate herself to do something extraordinary and will be attempting the race on foot.

Having served in the British Army for 19 years, a charity for veterans was one of her initial thoughts.  Finding out more about what Walking with the wounded do she felt that the cause: supporting a pathway for vulnerable veterans to re-integrate back into society and sustain their independence was perfect.

You can follow Rachel’s progress and support her challenge here https://www.justgiving.com/fundraising/rachel-forbes13 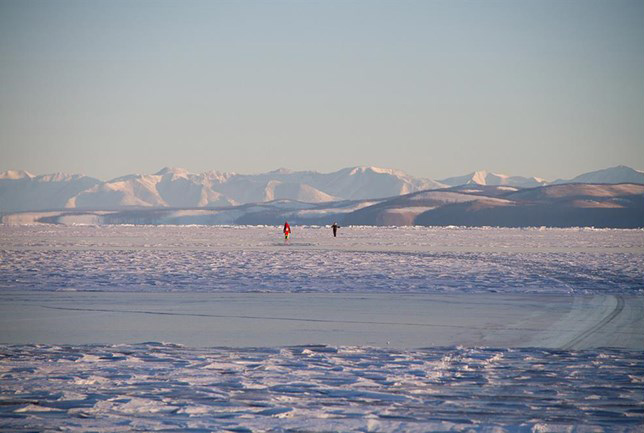 "Over a decade of his life, Jake mounted three expeditions to 'The Savage Mountain' - and finally reached the summit on the 21st July 2018, fulfilling a long held ambition. Jake's inspirational story is one of perseverance, tenacity and bouncing back from failure time and time again, despite the time, effort, cost and sacrifices made along the way."

Please join us at the The Royal Geographical Society on 28th February 2019 for a talk by long standing WWTW supporter and adventurer, Jake Meyer.

Click here to find out more and purchase tickets for the evening.

The Mfor Festival at Lydiard Park in Swindon is officially back on for 2019 and raising vital funds for Walking With The Wounded + others! Join us on 27 July 2019 at one of the most beautiful parks in the whole of the UK for a fun-packed, family friendly festival. Find out more at www.mforfestival.co.uk 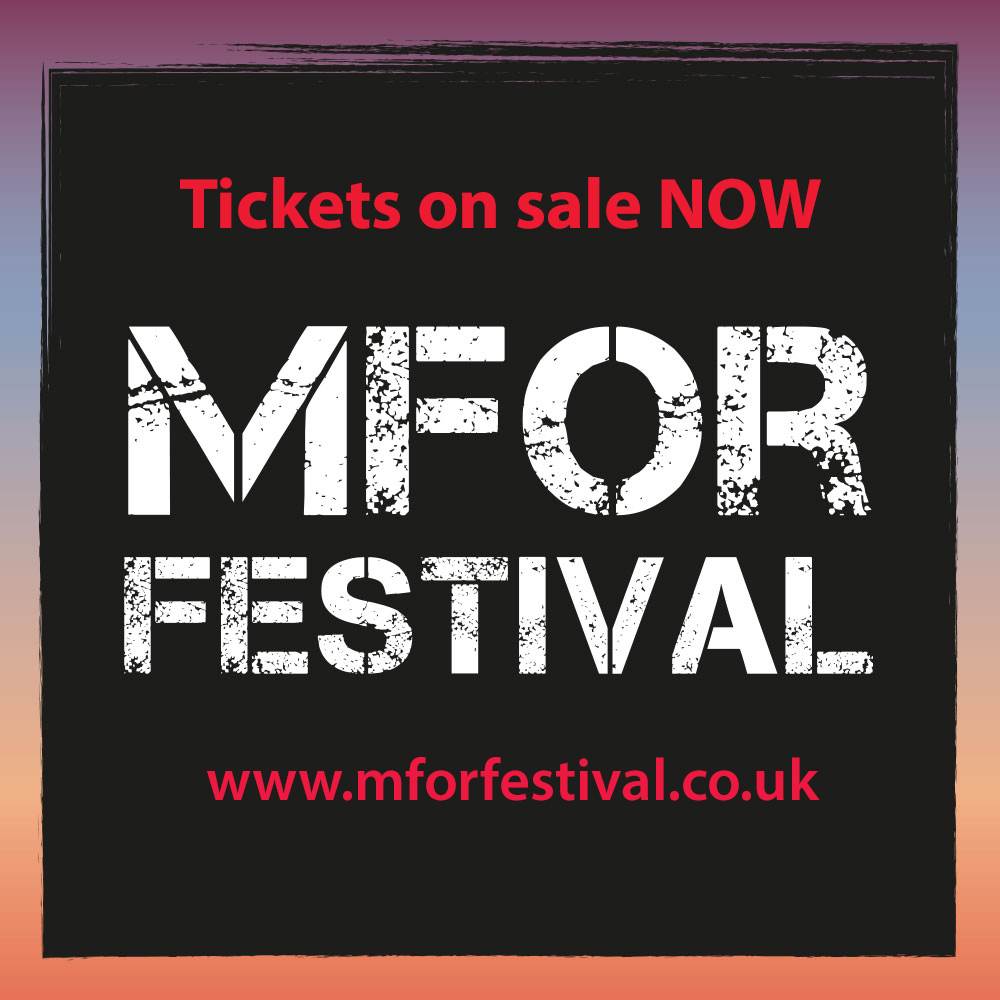 Schools publisher Gresham Books are publishing a brand new anthology of poems and reflections from the First World War to bring home the horrors of the ‘war to end all wars’. Featuring the best known poets as well as the voices of the ordinary soldier, the conscientious objector, the frightened, shell-shocked and bereaved, NEVER AGAIN will help today’s generations identify with and connect to the brave men and women who sacrificed so much 100 years ago.

5% of proceeds will go to support the work of Walking With The Wounded.

Click here to purchase your very own copy of Never Again.

Over 30 employees from Activision's UK 'Ditton Park' office will be participating in the ThamesPath Challenge on September 8th, covering a variety of distances from 10, 25, 50 and 100km.  Their goal is to raise awareness and generate donations for Walking With The Wounded as part of one of the Endowment's charitable trustees.

We wish them the best of luck! 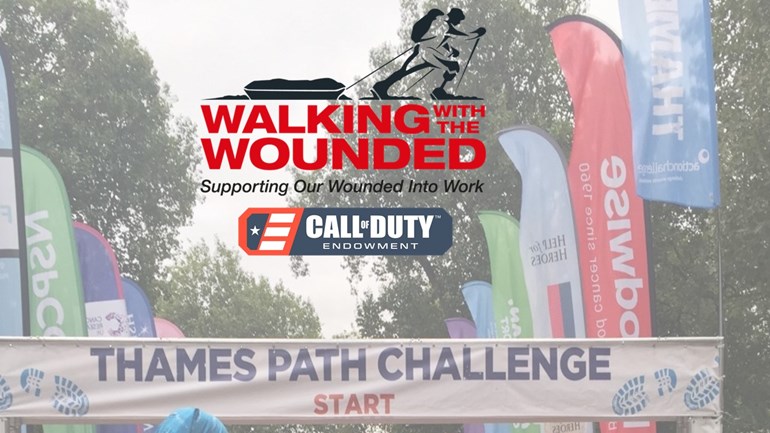 Team CarDashians (Rosanna, Anna, Miles and David) will be driving from the UK to Ulan Ude, Siberia, this July. Their journey should take approximately 7 weeks and they will be covering the distance of around 10,000 miles in their VW car that has a 1.2 litre engine. Their planned route is to go through Iran and up through the Stans (picking up Anna en-route in Uzbekistan). They'll be driving almost everyday to ensure that they reach the finishing line in Ulan Ude, just north of Mongolia. Who knows what challenges they could face. whilst striving to support our wounded veterans.. 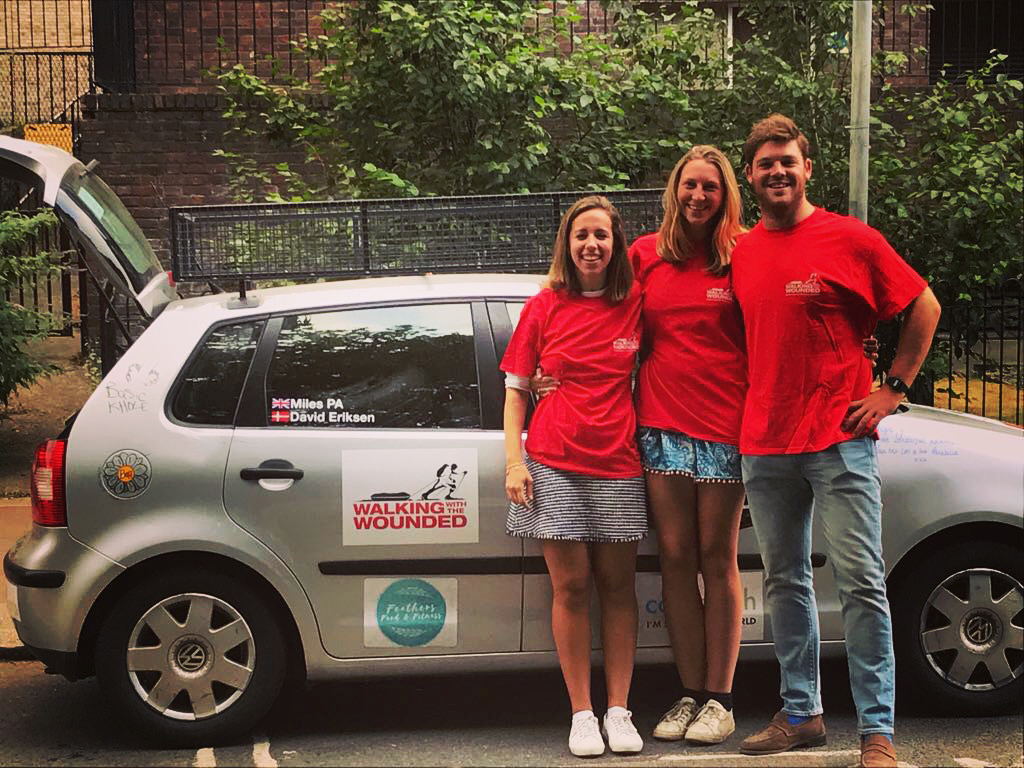 "I want to support John Mayhead in his journey as he is my old Company Commander from my Coldstream days. My motivation was lacking and when I read John’s story I wanted to support him. I hoped that by showing John I was out there it would let him know that we were thinking of him. I have been doing it since John started the walk of America and have decided that in July I would like to raise as much as I can."

You can still donate to the cause through his Facebook page or on Walking With The Wounded’s website referencing donations as John’s Journey. 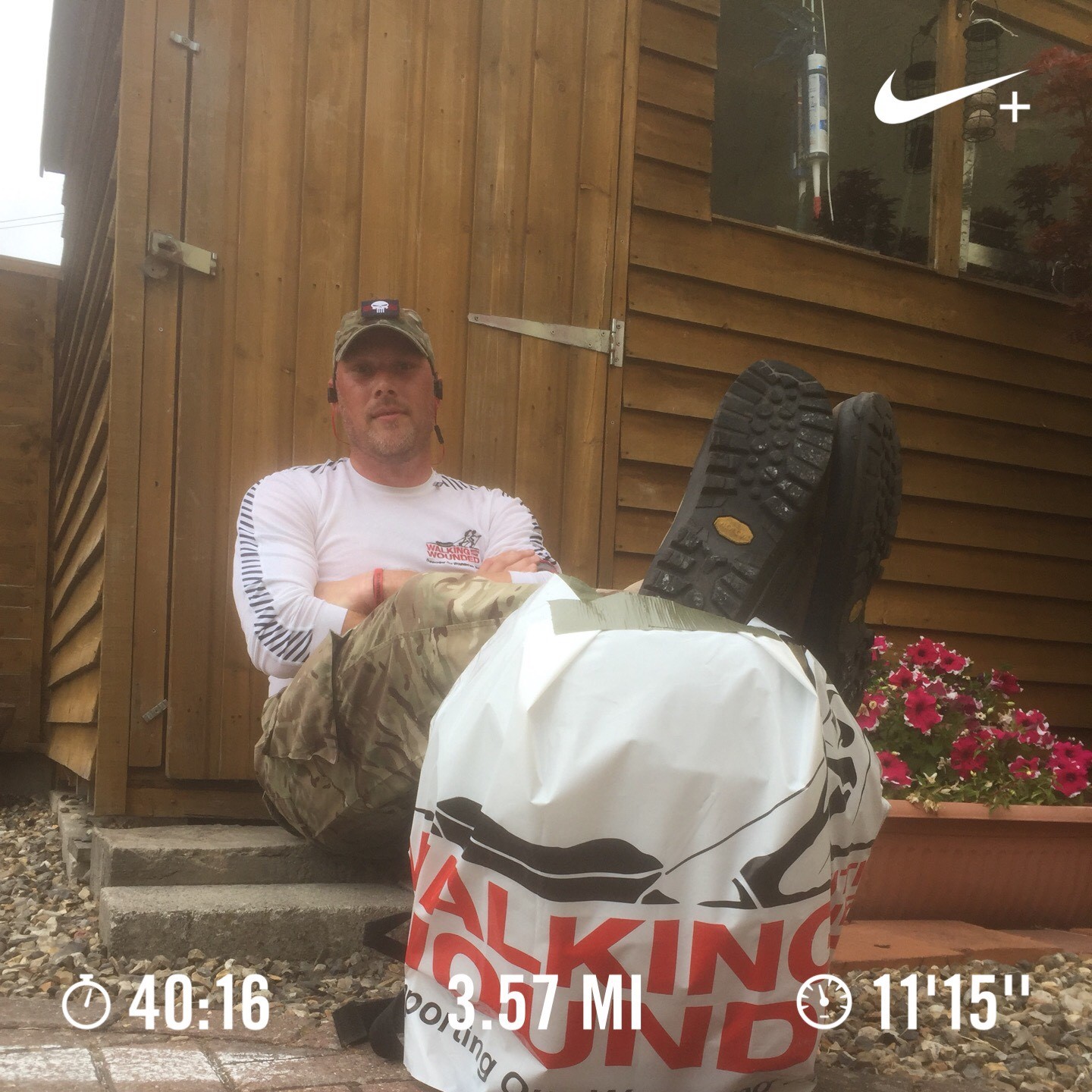 Kyle and Luke successfully walked from Ipswich to Pegasus Bridge in France!﻿

Kyle and Luke raised vital funds for Walking With The Wounded by walking 286 miles from Ipswich in Suffolk to Pegasus Bridge in France. They also carried55lb bergens. (You may remember Kyle from when he ran from Warrington to Ipswich in just 5 days last year!) Find out more and support Kyle on his Just Giving page. 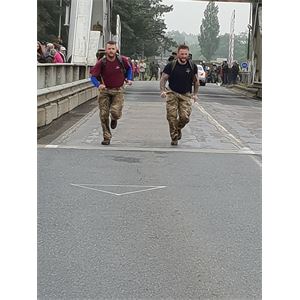 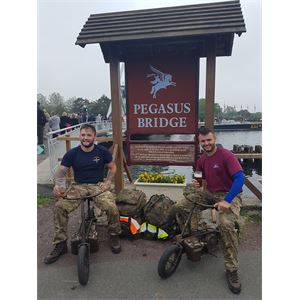 ﻿﻿﻿﻿﻿﻿﻿﻿﻿﻿﻿We are very grateful to Mark Carruthers who was keen to write a song about the plight that some veterans find themselves in after leaving the forces and after writing the song , Born to Fight he has now teamed up with Walking With The Wounded, dedicating proceeds of his new single to the charity. Mark said “I saw the good work, Walking With The Wounded do when I joined them for some fundraising challenges they ran in Cumbria and especially liked how they got beneficiaries of the charity to help, give talks and be involved in the events. If my song can raise a bit more awareness and raise some funds for the ones that need it then I’ll be happy.”

Click here to buy it now on Amazon UK 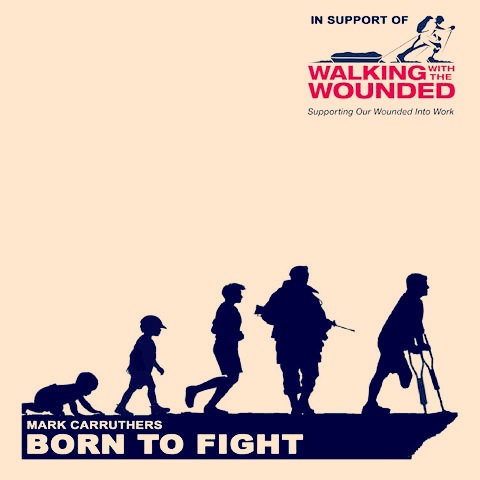